Commas are important in your IELTS writing exam 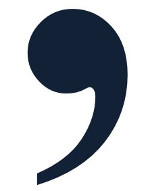 Many IELTS students and other people learning English seem to have problems with the use of the comma when punctuating sentences in English. It is really important that you try to use punctuation correctly in your IELTS exam.

“I’m going to eat everybody.”

If you say the above sentence, it will be quite frightening for those around you. Perhaps they didn’t realise that they had a cannibal friend. Imagine if you shouted it out. Everybody would run away screaming.

“I’m going to eat, everybody.”

There are lots of rules to consider with commas and how to use them but they are not really difficult to understand. It’s important to remember the following points:

“I didn’t eat the food, which was rotten.”

“I didn’t eat the food which was rotten.”

In the first sentence, you didn’t eat any of the food. The food was rotten. This is an example of a non-defining relative clause. The comma tells us that what follows is extra information about the food. It refers to all of the food. It is similar to saying:

I didn’t eat the food. The food was rotten.

A comma represents a pause. Try reading sentences with commas aloud and pause slightly at the comma. This should sound really natural. Remember that just because you pause in a sentence doesn’t always mean there is a comma!!
Can you explain the difference between these sentences?

Remember that commas don’t usually come between a subject and a verb or between a verb and that. You won’t find a comma after that. A comma is a pause and you wouldn’t pause in those places. Try reading the sentences below aloud and pause at the comma. It sounds unnatural, doesn’t it?

He, loves her.
I told him, that I didn’t want to buy his car.
She informed me that, she was resigning.

If we put more than one adjective before a noun, it is necessary to separate them with a comma.

He bought a cheap, blue car.

Using a comma after an introductory phrase or clause.

Place a comma between any introductory phrase or clause and the rest of the sentence.

As I walked around the supermarket, I planned what I was going to eat that evening.

Notice how the comma creates a transition in thought between â€œwalking around the supermarketâ€ and â€œplanning the meal.â€ Donâ€™t put a comma into your sentence because it looks like you need it. Read the sentence aloud and make sure that it sounds natural.

This rule is quite easy, isn’t it?
You noticed the comma in the last sentence, didn’t you?

If we use an adverb at the beginning of a sentence to say how we feel about the sentence, it is followed by a comma.

A: Commas are confusing.
B: Actually, they are quite easy to understand if you follow the rules.

A: Did he pass the exam?
B: Unfortunately, he failed it.

We don’t usually need commas with adverbs in other places in the sentence.

She sings that song beautifully.

In your IELTS writing, you will use lots of phrases that introduce sentences. They are followed by a comma.

Certain words and phrases in the middle of our sentences also need a comma.

The best way to practise your use of the comma is to actually do some writing. Of course, you need to have your IELTS writing corrected so that you can see whether you are using commas correctly. Do you want an online English teacher to correct your IELTS written work? Your writing will improve quickly if you take online English classes.